END_OF_DOCUMENT_TOKEN_TO_BE_REPLACED

By Diana Christopulos Posted on May 25, 2016 Posted in Leave No Trace, McAfee Knob/Triple Crown 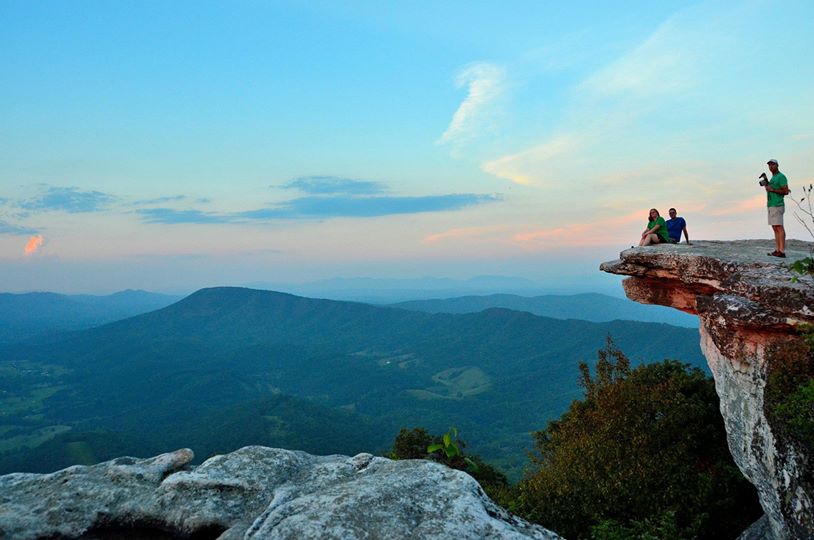 NEW DATE for Training Day: June 18, 2016, 9 am – 2:30 pm
Perched high above the Catawba Valley, McAfee Knob is the most photographed place on the entire Appalachian Trail, and a beloved symbol of the natural beauty and opportunities for adventure that make our region so special.
But McAfee Knob is also a fragile place, in danger of being “loved to death”. In 2015 McAfee Knob was nationally designated as a Leave No Trace Hot Spot. The Roanoke Appalachian Trail Club (RATC) had long recognized a need for targeted stewardship and education along the heavily trafficked trail that connects McAfee Knob and nearby “crown jewels” Dragons Tooth and Tinker Cliffs. Rapidly increasing visitation has led to an increase in avoidable environmental impacts like litter, graffiti, trail erosion, and problematic bear behavior.
RATC created the McAfee Knob Task Force to focus on resource protection in the area, and a vibrant crew of 20 club members patrol the Trail as Volunteer Ridgerunners to help mitigate these problems with outreach and trail maintenance.
END_OF_DOCUMENT_TOKEN_TO_BE_REPLACED

What to do when a bear wants your food

By Diana Christopulos Posted on May 16, 2016 Posted in bears, Leave No Trace, McAfee Knob/Triple Crown Tagged with bears

What should you do when you are on the trail and a bear wants your food? Get a copy of the tips shown below from 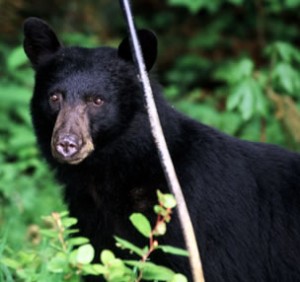 the Virginia Department of Game and Inland Fisheries here.

To help yourself and others:

Generally black bears are naturally wary/fearful of people and prefer to avoid contact. However, bears that have been purposely fed or gotten a food reward from people may lose this wariness.  These bears may try to “scare” you into leaving your food or pack. They may pop their jaws or swat the ground with their front paws while blowing and snorting, and/or may lunge or bluff charge toward you in an attempt to get you to leave. These bluff charges rarely end in contact and should never be rewarded with food that is left unattended or thrown at the bear.  Should you encounter a bear displaying this behavior:

National Leave No Trace Training open to the public in Roanoke and New River Valleys, September 24-28, 2105 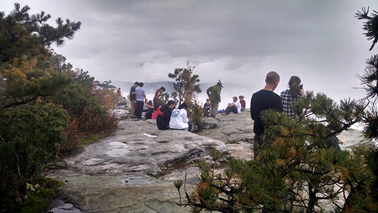 What do McAfee Knob, Saguaro National Monument, Point Reyes National Seashore and Linville Gorge have in common? All are among the twelve national Leave No Trace Hot Spots for 2015. Headquartered in Boulder, Colorado, the Leave No Trace Center for Outdoor Ethics and its Subaru/Leave No Trace Traveling Trainers team are partnering with the Roanoke Appalachian Trail Club and Appalachian Trail Conservancy to host community events and educational activities September 24-28, 2015.

The Hot Spot Program, a key component of the Leave No Trace in Every Park initiative, raises community awareness and brings solutions to popular natural areas around the country facing heavy recreational use and consequently, the threat of harm to trails, parks and open space areas. The Subaru/Leave No Trace Traveling Trainers travel throughout the country providing public education about how to reduce impacts in the outdoors.

“The cumulative impact of so many people enjoying a great viewpoint such as McAfee Knob can have negative effects,” according to Stephanie Whatton, Subaru/Leave No Trace Traveling Trainer. “In most cases, the land impact isn’t due to a malicious intent to harm nature and wildlife. Instead, it’s simply lack of Leave No Trace education and practices.”

The following Leave No Trace events are free and open to the public:

END_OF_DOCUMENT_TOKEN_TO_BE_REPLACED 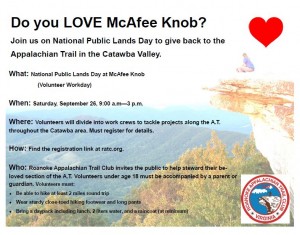 Why September 26? It’s National Public Lands Day! But that’s not the only reason. END_OF_DOCUMENT_TOKEN_TO_BE_REPLACED