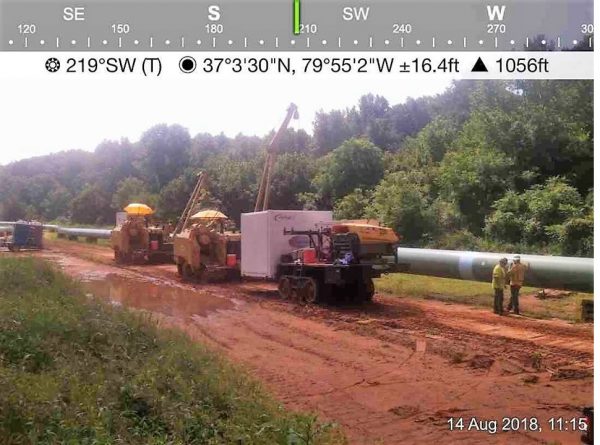 THIS POST WILL BE UPDATED AS NEW EVENTS OCCUR. On July 27, 2018, a federal court ruled in favor of the Sierra Club and other plaintiffs that federal agencies (US Forest Service and Bureau of Land Management) had not properly examined Mountain Valley Pipeline’s proposal before issuing permits for its construction through Jefferson National Forest. The Federal Energy Regulatory Commission (FERC) then issued a Stop Work order but has since allowed Mountain Valley Pipeline to rewrite the Stop Work order TWICE, and encouraged the company to build over 100 miles of the pipeline as fast as possible.

The court ruling directly affects the crest of Peters Mountain, where MVP proposes to bore under the Appalachian Trail, as well as construction areas where the pipeline route would have a significant impact on the AT off and on for about 100 miles.

This blog aims give a little clarity to a very complicated process by giving the names, dates and basics of the situation as it unfolds. LINKS will take you to the original documents.

HERE IS THE BASIC TIMELINE. IT WILL BE UPDATED AS EVENTS UNFOLD.

Local observers document ongoing construction during this time; at least one landowner is told by MVP representative that Stop Work order does not apply outside of Jefferson National Forest

August 9, 2018  MVP submits a “Stabilization Plan” that allows 45 to 90 miles of construction during the Stop Work Order

August 10, 2018  FERC approves most of the “Stabilization Plan,” with some decisions “Pending”

August 14, 2018  MVP requests that FERC modify the Stop Work order again so they can continue with construction. They offer their own version of “Stop Work” order, which would allow construction of over 100 miles of pipeline plus compressor stations.

Thursday, August 16, 2018 FERC again revises the Stop Work to suit the pipeline company and urges work to be done as fast as possible.

To build a pipeline, Mountain Valley Pipeline needs a range of federal and state permits. The Federal Energy Regulatory Commission (FERC) is in the lead to determine public need and environmental impacts. On federal land such as Jefferson National Forest, federal agencies such as the US Forest Service (FS) and the Bureau of Land Management (BLM) must also conduct their own analysis and supply permits before FERC allows construction.  Two of these permits have been withdrawn, and lawyers for Sierra Club and others in the lawsuit argue that therefore MVP no longer has the permits it needs before FERC can continue construction. FERC originally appeared to agree with this, but MVP continues to offer ways that construction can continue, and the FERC continues to accept them.

Here is the process so far in more detail, with additional information and links to the relevant documents. This will be updated as events unfold.

Friday, July 27, 2018. 4th Circuit Decision vacates federal 2 permits for MVP. Responding to a lawsuit by Sierra Club and others, the Federal 4th Circuit Court of Appeals in Richmond “vacated” the federal permits that had been issued by the US Forest Service and the Bureau of Land Management on the Jefferson National Forest. This would clearly halt construction on about 3.5 miles of the 300+ mile project. The permit decisions were remanded back to the FS and BLM, who will need to revisit their decisions.  According to the court:

Wednesday, August 1, 2018. Lawyers for Sierra Club and others ask FERC for a Stop Work order on the entire 303+ mile route. Accession #20180801-5004. If the FERC e-library is down (happens often) try this link. Because FERC is required to have all federal permits in hand before allowing construction, the lawyers who brought the suit in the 4th Circuit filed a letter to FERC stating that a Stop Work order should be issued for the entire project, not just the 3.5 miles in Jefferson National Forest.

Friday, August 3, 2018. FERC issues a Stop Work order for the entire route. Accession#20180803-3076. If FERC e-Library is down use this link. FERC gave MVP 5 days to submit a Stabilization Plan during the Stop Work period.

Thursday, August 9. MVP submits a Stabilization Plan to FERC – mostly Privileged (later hidden from public view on filing). Accession# 20180809-5013. If FERC e-library is down use this link. We received this filing at 9:37 am. Most of the filing is labeled “Privileged” so that landowners cannot tell how the MVP is describing status on their land nor exactly what MVP is proposing to do there during the Stop Work order. The original filing showed many “Privileged” files that the public cannot view. A recheck of the FERC library on August 13 had entirely removed any reference to these files. Some further digging revealed just one, showing county by country status of project. But it cannot be opened. So this plan is not public except for the Jefferson National Forest and Blue Ridge Parkway segments. Landowners cannot see MVP’s description of their own land.

Friday-Tuesday, August 10-14, 2018. FERC immediately approves most of the MVP Stabilization Plan, with one later revision. Accession# 20180810-3072. We received the original filing at 7:41 pm on Friday. FERC took only one day to approve an extensive plan. The approval was signed by Terry L. Turpin, Director of the Office of Energy Projects for FERC. This allows approximately 45-90 miles of construction to continue while the Stop Work order is in effect. Several sections are listed as “Pending.” MVP asked, for example, to lay pipe and bury it in Jefferson National Forest during the Stop Work order. Paul Friedman, the FERC project director files slightly revised version of approved MVP Stabilization Plan on August 14.

Continued documentation from observors that MVP is laying and burying pipe

Tuesday, August 14, 2018. MVP offers a modified Stop Work order to FERC. Accession# 20180814-5073. It now appears that EQT/MVP may have taken over writing the Stop Work order to suit its own purposes. MVP asks for blanket approval of construction on first 77 miles of the project, on all compressor stations and in other locations. One has to wonder: who is really in charge of making decisions at the Federal Energy Regulatory Commission?

Wednesday, August 15, 2018 Sierra Club and others file legal challenge to FERC action in federal courts. Emergency motions were filed with the U.S. Court of Appeals for the Fourth Circuit and the Washington, D.C. Circuit Court of Appeals. The coalition is arguing that MVP should cease all construction because it is “necessary to ensure that the Forest Service and [the Bureau of Land Management] can appropriately respond to this Court’s instructions and will prevent unnecessary, imminent, and irreparable harm.” Sierra Club Legal Director Pat Gallagher released the following statement: “If your parents tell you to eat your vegetables before your dessert, that doesn’t mean you cram all the cake in your mouth. Despite orders to stop construction, MVP is once again proving it cannot be trusted, so we are asking the courts to force them to stop construction. We’ve been fighting MVP’s every attempt to disregard commonsense protections for clean water, forests, and communities, so it’s not really that surprising we’d have to block their end run around our judicial system, too.”

Thursday, August 16, 2018. FERC approves MVP version of Stop Work order. Allows construction of miles 0 to 77 and all compressor stations plus whatever else was already approved and urges MVP to work as fast as possible. Accession # 20180815-3057.