Those views and quality hikes are certainly speaking for themselves. In 2017, over 80,000 people hiked from Route 11 in Roanoke County to McAfee Knob. That rocky summit is often said to be the most photographed spot on the entire AT. Several years ago, the name “Triple Crown” was coined for three spots on the AT in Roanoke County – Dragon’s Tooth, McAfee Knob and Tinker Cliffs. Students from three large universities – Virginia Tech, Radford and Liberty – frequently hike these peaks, as do hikers from all over the Eastern US who know about the Triple Crown through social media. This popularity present a challenge for RATC.

Due to heavy use of the Triple Crown section, RATC created a special McAfee Knob Task Force of volunteer ridgerunners to educate the public  on Leave No Trace principles and clean up many gallons of trash.

RATC volunteers also take steps to prevent erosion from weather and foot traffic. One way of doing that is by making trails with zig-zagging turns known as switchbacks, which lessen erosions by preventing rain water from eroding the path. The RATC encourages hikers to follow the switchbacks instead of finding shortcuts through brush, which damages vegetation and results in runoff. 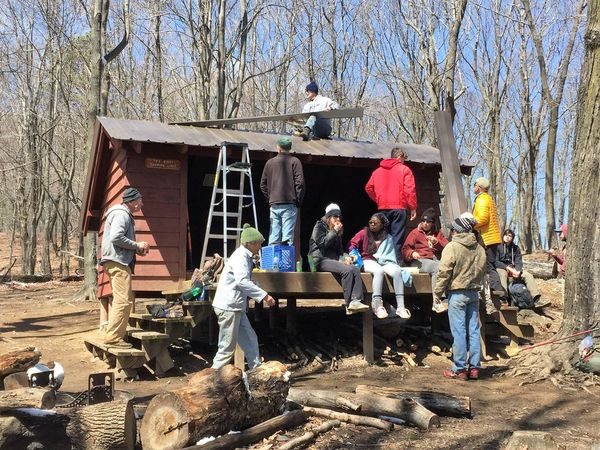 Two dedicated volunteers are Homer and Therese Witcher. Their love of this trail started over 30 years ago when they went for a hike. They saw a white blaze trail marker but didn’t know what it meant. After following it to a sign telling them about the AT, in their words, “We were hooked.” Since then they’ve spent countless hours enjoying and maintaining the AT. They even got married at the top of McAfee Knob and spent their honeymoon at Tinker Cliffs. A painting of Therese in her wedding dress at the overlook hangs in their home.

In their role as volunteer shelter supervisors, Therese and Homer are responsible for repairs and improvements to 16 shelters and their privies. Recently they organized roof replacements on two shelters and are in the process of replacing fire rings at the sites. With no motorized vehicles allowed on the AT, that means carrying in the 80-pound fire rings to each location. The couple also maintains stretches of the AT in Daleville and at Tinker Cliffs. For years, they have been planting trees, clearing invasive species, vines, brush and keeping the grass cut. “It takes us about 20 hours to mow everything with push mowers,” Therese said. The two, now both retired, volunteer almost daily, logging almost 300 hours each so far in 2018.

Because of the volunteer work of people like Jim Beeson, the Witchers, and many others, the AT will remain a viable recreational outlet for decades to come. Because of this, the Blue Ridge Land Conservancy is happy to present its Landsaver Award to the Roanoke Appalachian Trail Club for its work encouraging and enabling outdoor recreation and love for the mountains we all call home.