As we get ready to start a new hiking season,  both hikers and maintainers might enjoy this piece I wrote in honor of Katahdin guide and caretaker Roy Dudley after finishing a complete section hike of the AT in 2008. Enjoy!

Hikers are from Venus, Maintainers are from Mars ~ Dedicated to the spirit of Roy Dudley, an early Katahdin guide who knew the ways of Pamola 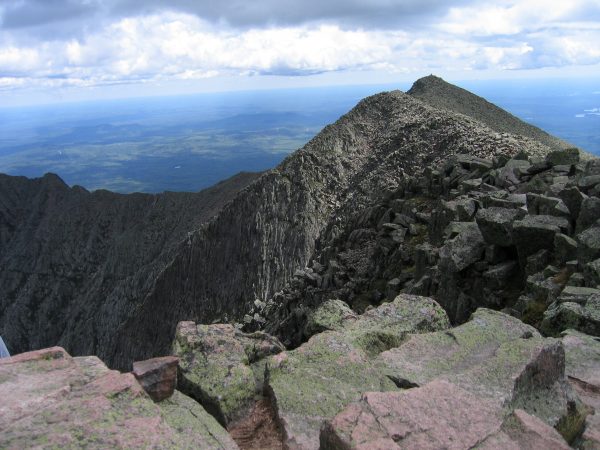 Once upon a time on a long winter night, Pamola, spirit protector of Katahdin, sent for Beaver, his steady minion. “I will put an end to the noise of Hiker and Maintainer always complaining about each other,” said the thunder god, stretching his gigantic wings and flexing his eagle talons.  “Their petty insults can be heard from Springer Mountain to my thrice-hidden lair.” Pamola swiveled his stately head and looked off to the south. “Bring them to me! Maybe I will finish them off.”

So Beaver went to the low country and found Hiker, who was enjoying a long zero day, lying on his sofa and eating a Snickers for dessert after a gobbling down Ramen noodles and Slim Jims.

“Hey!” Hiker shouted at Beaver, “You’re blocking the view of my widescreen HDTV!” Beaver grabbed the scruff of Hiker’s collar with his large teeth and hauled him away.

They found Maintainer at home, planning a relocation. She would reroute several miles of the Appalachian Trail, moving it away from a well-graded old forest road and on to a trackless boulder field. “That will give them something to remember!” thought Maintainer. Just then Beaver snatched her up, dangling her in the air beside Hiker. They soared off to the Maine woods.

As they flew up the chain of mountains, Hiker complained about the cold winds, the shape of Beaver’s teeth on his neck and the cirrus clouds that dimmed his view of the moon. Maintainer silently worried that Beaver’s jaws were not strong enough to carry them safely. If she were Pamola, she would have sent a Forest Service helicopter.

Finally, they reached Pamola’s lair in Alomkik, deep inside the mountain. It was cold, with only a small fire, and Hiker was certain he could have built a bigger and warmer blaze. Then he noticed the enormous pile of bones in one dim corner, perhaps the remains of previous visitors. 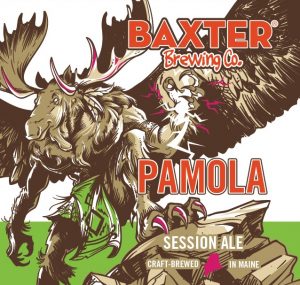 The Mighty One inclined his head toward them, his antlers towering over their soft, puny bodies. “So,” Pamola snarled, “you are the humans who have painted my rocks, crawled up my mountains, and made so much noise. I am sick of your whining and arguing. What have you to say for yourselves?”

Maintainer noticed the flexing eagle talons and wondered how many pounds of pressure they were generating.

Hiker gulped audibly, but recovered quickly. “Great Pamola,” he said, soothingly, “I am your partner in protecting these mountains from casual hikers.  I walk fast and carry a light pack, and I don’t throw my trash in the hills. Or, not very often.”

“I too defend the mountains,” interrupted Maintainer. “My work protects the mountain from erosion and keeps Hiker waste from polluting the streams. I haul out their trash, lots of it. And I make things hard enough to discourage casual travel in many places, especially here in Maine.”

“Don’t I know that’s true,” agreed Hiker. “Haven’t you ever heard of switchbacks and bridges? Why is it all boulder gardens, rocks, roots and bogs? I can’t even look up in Maine! And what about the White Mountains? Nothing but rock hopping, and slip sliding. What were you thinking?”

“Enough!” thundered Pamola, standing up to his full height, which Maintainer estimated at 17 feet 2 inches. “I have made my judgment! Unless the two of you want to stay here forever, you must obey my commands. You, Hiker, stop complaining! If you do not help build and keep the Trail you cannot criticize.”

Cowering in his Crocs, Hiker said nothing.

“And,” continued Pamola, “think about what you have done besides tearing up my mountains with your boots and poles. Did you join the ATC? Have you done any volunteer work? Do you ever thank Maintainer?”

Spying Maintainer’s smile, Pamola turned his baleful eye in that direction. “And you, Maintainer. Do you ever think of Hiker? Here are your rules. Starting this year and then every three years, you must recruit a local hiker who has never walked your section. The two of you must prepare full backpacks weighing at least 30 pounds and wait for a rainy, foggy day. Then the two of you must hike your section with your inexperienced friend in the lead. Where does the hiker get lost? Fall down? Begin babbling nonsense?”

“After five miles,” intoned Beaver, “are there still smiles?”

“Have you heard me?” Pamola roared, extending his wings and closing in on the visitors, towering over them until they quivered with fear.

“Then be gone! If I ever hear of this argument again, I will make you both live inside the mountain forever.”