Have fun outdoors – join the RATC community in 2016!

While the latest snow melts, it is not too early to play outside with the Roanoke Appalac 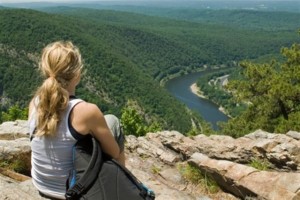 hian Trail Club. Founded by AT legend Myron Avery in 1932, RATC’s volunteers are the stewards for 16 shelters and over 120 miles of the AT between Lickskillet Hollow and Black Horse Gap.

Come hike with us. Last year we led over 100 hikes – short and long, easy and strenuous, on and off the AT. See a full listing of hikes and sign up by joining our Roanoke Appalachian Trail Club MeetUp group, which already has over 1,000 members. Check the MeetUp calendar for upcoming hikes – we already have 14 scheduled in February!

Be a maintainer. Want to help maintain the Appalachian Trail or build new trails in our region?  This is work is a little slow right now, but contact our Trail Supervisor, Jim Webb, if you want to get involved.

Patrol Virginia’s Triple Crown. We started a new group in 2015, the McAfee Knob Task Force, whose 18 current members help the Appalachian Trail Conservancy’s Ridgerunners patrol not only the AT around McAfee Knob, but also Dragon’s Tooth and Tinker Cliffs. Last year we put in over 500 volunteer hours on the trail – counting over 9,000 visitors; engaging with more than 5,000 of them and hauling out 154 gallons of trash. And we were smiling, because we did this job on one of the most scenic parts of the entire AT. As one member signed always concluded her monthly reports: “Best.Job.Ever!”  Task force members must a) be a member of RATC; b) complete a Saturday training program (the next ones will be on March 19 and June 11, 2016) and c) go on patrol with a trained member of the task force before they go out on their own. Join the RATC’s McAfee Knob MeetUp group if you are interested in this option. 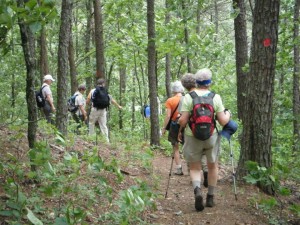 Keep up on the news by “Liking” our Facebook group – almost 850 people have already done it.

Join RATC. It’s cheap and easy, and your dues help pay for the materials and equipment needed to keep the AT in shape. And membership gives easy access to many opportunities for fun and for giving back to the community. Just click here to join.

Socialize with other members. RATC has two regular Hiker Happy Hours each month – both are on the MeetUp calendar. Look for the tree stump with a white blaze on it!

In the Roanoke Valley, join other hikers at the Parkway Brewing Company, 739 Kessler Mill Road in Salem at 6 PM on the third Thursday of each month.

In the New River Valley, hikers meet at Lefty’s Main Street Grill, 1410 S. Main Street, Blacksburg, VA at 6 PM on the first Tuesday of each month.

The Potluck and Annual meeting is on March 12 this year, and includes a presentation on the Jacobsweg, one version of the Pilgrim’s Way in Europe. Details are here.

In addition, RATC has a Corn Boil picnic in August and a holiday party in December.

See you on the Trail! And around the region.